On June 10th, sixteen men will come to Brandon, Florida and compete over the next two nights in the third annual Peterson Cup. And when former IPW World and NWA Florida Heavyweight Champion Billy Fives hands the trophy to the winner of the Cup, it will be about more than just winning a wrestling match or even a grueling two-night tournament. 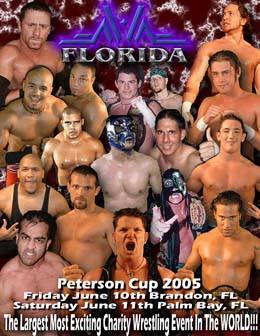 It will be about paying tribute to the memory of a brave young superstar who loved the business, and about helping those less fortunate.

You see, the “Peterson” in the Peterson Cup refers to Jeffrey R. “The All American” Peterson, who, at the age of 21, passed away on November 29, 2002 after a long battle with cancer. Peterson, a two-time IPW Cruiserweight champ had wrestled primarily in Florida and his home state of Delaware, but traveled throughout the U.S., including California. His career included epic battles with Jet Jaguar and Mike Quackenbush over the IPW Cruiserweight title. Proceeds from both nights of the JPC 2005 will be donated in Jeff Peterson’s name to charity.

The people involved in NWA Florida and the people who knew him decided that mere words were not enough to pay proper tribute to Jeff.

“After Jeff passed, it really hit everyone here very hard,” said Lenny Thomas, the ring announcer and commentator for NWA Florida. “He was such a good kid, and he had done so much for everyone in this company, we felt we had to do something to let others know how amazing he was, both as a wrestler and more importantly as a young man.”

“We feel it’s our duty, honor and privilege to put this tournament on,” Thomas said. “Jeff wrestled all over the country, but IPW and now NWA Florida was and is always going to be his home. I was at the Super 8 in 2003 right after he passed away and they did an amazing tribute to Jeff at those shows, but here the shows are the tribute to Jeff, and we wouldn’t want anyone else to have that honor.”

Ron Niemi and Joe Price of NWA Florida (and in conjunction with IPW) began work on the first Jeff Peterson Memorial Cup, which took place on May 16-17, 2003 at the Florida Wrestleplex in St. Petersburg, Florida. With Jeff receiving much acclaim for his performance in the 1998 and 1999 ECWA Super 8 Tournaments (run by his uncle Jim Kettner), it was decided that a similar-type tournament be held in Jeff’s memory.

A year later, a second show was held, this time on June 3-4, 2004 at two facilities, the Brandon All Stars and St. Petersburg National Guard Armory. Justice defeated Roderick Strong and Chris Hero in the finals of a tournament that also featured Teddy Hart and Petey Williams.

“The last two years have been tremendously successful. The first tournament raised several thousand dollars in Jeff’s name for the American Cancer Society,” Thomas said. “Last year’s tournament was a little more ambitious with us making it three shows over two days, and we raised more than double what we did for the first set of shows.”

And now in 2005, the third Peterson Cup will once again be held, this time in Brandon, Florida at the Brandon All Stars. The proceeds from the event will, like those from the 2004 Peterson Cup, go to help Bailee Dunnigan, a young girl stricken with Acute Lymphoblastic Leukemia, the same horrible disease that claimed the life of Jeff Peterson. Young Bailee was diagnosed with the disease on March 5, 2001 and relapsed exactly three years later, on March 5, 2004.

“I absolutely think the wrestlers are affected,” Thomas revealed. “We had Bailee at the finals last year and she got to meet all the boys, and have pictures taken and to see her face light up when everyone came around it had to affect you, to see a little girl like that face so much adversity at so young an age affects everyone I think on some level.”

This year, proceeds from the Peterson Cup will also be donated to the Evan A. Ashcraft Memorial Foundation. Named in memory of Sgt. Evan A. Ashcraft, who was killed in action in Iraq on July 24, 2003, the Foundation was started by Jim and Jane Bright and performs charitable acts in the name of Ashcraft, who said that when he returned from Iraq, his goal was simple: “I just want to help people.”

“I think anyone who comes to these shows, or even just buys the DVDs when they come out, can expect to see some of the best young athletes from not just Florida, not just the United states, but from around the world,” Thomas said. “We have athletes from every major wrestling organization around and they are all coming here to put on what we hope to be two of the best wrestling shows anyone will ever attend, and they’re doing it for charity.”

“The 2005 Peterson Cup features some of the best talent from all over the United States as well as Japan and Canada,” Delirious told SLAM! Wrestling through an interpreter. “I have wrestled most of the talent in the tournament before but on June 10th it will be a little different with a little more on the line.”

Mickey Batts, who faces James Gibson in the first round, believes that the Peterson Cup can boast “the greatest array of Cruiserweight talent in the country in one place at one time.”

Ricky Reyes, who faces Jay Fury in the first round of the tournament, is “very excited” to be involved in the tournament, saying that there are “a lot of top wrestlers (in the Cup), I feel pretty honoured to be in it this year.”

In addition to the tournament, fans in attendance during the June 10th installment of the tournament will see NWA Southern title champion Lex Lovett defending against TNA’s “Phenomenal” A.J. Styles and the Strong Brothers (Sedrick and Roderick) team together to face the “Modern Miracle” Steve Madison and Rage in the Cage 2005 Champion Erick Stevens.

The importance of the event and the worthwhile causes it will help support is not lost on any of the competitors.

“A charitable show is always a bit more important then a normal show because it raises the awareness of the given charities and lends a hand to those who have been less fortunate in life,” said Delirious, who faces Chris Sabin in the first round.

“It is great to see all these folks come out for a worthy cause. It’s very admirable and I am proud to participate again this year,” said Jerelle Clark, who faces Petey Williams in the first round, “I’m looking forward to it, with all the talent that is being brought in, I can’t wait to sit back and enjoy the rest of the show.”

Sonjay Dutt, who makes his second appearance at a Peterson Cup, agrees. “It’s a great event for a great cause. This is my second time in JPC and I’m very happy to be a part of something like this.”

“I just want to help people.”

The words of a hero and on June 10th and 11th, the wrestlers involved in the Jeff Peterson Memorial Cup, will step in the ring in Brandon and together with the promoters and staff of NWA Florida, will help Bailee Dunnigan and preserve the memories of Evan A. Ashcraft and Jeff Peterson.

“Jeff would love the fact that we do these shows, his only regret would be that he himself couldn’t wrestle in them himself,” said Thomas.

Jeff Peterson might not be there in person, but certainly one must believe that he will be there in spirit.

And on those two nights, professional wrestling will hold its head high.