ORLANDO — It’s Tuesday afternoon, just two days after the Lockdown pay per view (PPV) and Jeff Jarrett is as busy as ever.

He is an active professional wrestler, current holder of the National Wrestling Alliance (NWA) world heavyweight title. He is a member of the higher echelon of the Total Nonstop Action (TNA) promotion, crusading to secure a sound financial future for his upstart company. He’s a family man, trying to maintain some semblance of a personal life in the maelstrom world of professional wrestling. 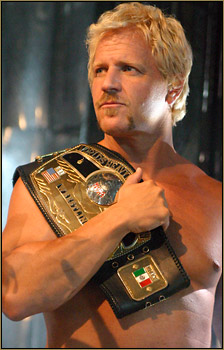 Jeff Jarrett makes no apologies about his efforts to innovate professional wrestling. Photo courtesy of tnawrestling.com

At soundstage 21 at Universal Studios Florida, Jarrett sets aside a few precious minutes to talk to SLAM! Wrestling. When asked about his life and the multitude of distractions that consume him on a daily basis, he gives an all too commonly heard answer for what keeps him going.

“This is what I love,” said Jarrett. “I grew up in this business, it’s my passion. You have to live it, eat it, sleep it, think it and that’s what I do. It certainly hasn’t been easy.”

Nowhere more in his career is wrestling testing his commitment than in the last few years with TNA. From the date of its inception in 2002, the company was staring at certain oblivion when their financial backers pulled out after only a few months. Saved by Panda Energy, now the majority shareholders, TNA had to then convince wrestling fans to shell out money on a weekly basis via their initial weekly PPV format.

Along with the various personalities that have come and gone from the promotion and the struggle to create superstars who draw a paying audience, to say that the lifespan of TNA has been tumultuous would be an understatement.

But despite the hurdles, they’re still here, proving the skeptics wrong and establishing themselves as the wrestling company that just won’t die. “June will be our third year anniversary. Nobody thought that would happen and I’m excited,” Jarrett said. “In the next three to six months, TNA is going to take it to another level.”

But that’s par for the course.

As Jarrett explained, paramount to TNA prospering is creating a unique identity. Nowhere have they achieved that with glowing results than in the X Division, where the roster was given a platform to innovate and produced a clear majority of the promotion’s most outstanding, high impact contests to date.

“The X Division truly sets us a part from any other wrestling company in the world,” said Jarrett. “TNA is truly cutting edge. We have to be — we can’t rest on yesterday’s laurels of the business. We got to bring new things to the table and we continue to strive to do that.”

From there, the evolution of the Ultimate X matches, where competitors would dangle above the ring from wires. The concept delivered something new to fans while traditionalists bemoaned another entrenched gimmick.

“It is the most important factor that we have to set ourselves apart, not just from our competition of today, but the entire industry. In any kind of entertainment or sporting business, you have to have that fan base. If the fans aren’t excited, if their creative juices aren’t flowing, it makes for a stale product,” said Jarrett.

“In TNA, we attempted the six-sided ring. A lot of people said it’s so non-traditional. Now, when I look at a four-sided ring, I feel that’s almost old school,” he continued. “In this business, it can’t grow unless you take risks and chances. We try things here at TNA to try and take the business to the next level.”

Their most recent initiative, April’s all steel cage Lockdown PPV, was decried by some as watering down the aura of the steel cage.

“It was going to be critically acclaimed, either positively or negatively,” admitted Jarrett. “It was a gamble and we knew that — eight cage matches with different stipulations. In my opinion, if you’re a wrestling fan, you got your money’s worth.”

Flawless it was not, but neither was it lackluster, with the TNA roster tasked with the mission of making Lockdown worthy of attention and in doing so, silence the naysayers.

No other match achieved than the main event where A.J. Styles took on Abyss. It was a contest that clearly established Styles as the go to performer who can deliver when it’s needed the most.

As always, it was the roster that took ball given to them and ran with it, with a raucous Orlando crowd cheering them on all the way.

“From top to bottom, the effort from everyone who stepped in the ring was unbelievable,” reflected Jarrett.

The effort to establish TNA as the new alternative is not only being marketed to the disenfranchised, but corporate America. While the promotion has acquired television clearance on Fox Sports Net channel, they are still in the chase to secure a lucrative weeknight time slot that will put the promotion back into the collective consciousness of casual wrestling fans.

“It’s a lot easier from the inside looking out than opposed to being on the outside looking in,” said Jarrett, explaining that their focus on innovation is crucial to garnering interest from the power brokers of the entertainment world who can grant TNA the exposure they need. “I understand that some people are scratching their heads on certain issues. There are certain issues that we have to distinguish ourselves when we are facing corporate America.”