MONTREAL – With their fifth anniversary now entrenched well into recent memories, and the Sid Vicious debacle just a dark memory, the Internet Wrestling Syndicate had its monthly card Saturday at the Unison bar in the western suburb of St-Laurent.

Named Freedom to Fight, this card partially celebrated the return of five of their own from an appearance at a Combat Zone Wrestling show at the famed ECW Arena in Philadelphia. 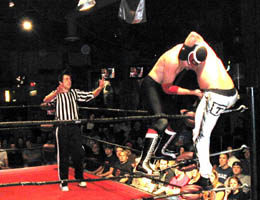 The show got under way with a presentation of a video featuring El Generico, “Mr Wrestling” Kevin Steen, Sexxxy Eddy, Excess69 and Beef Wellington, the first four in a four corner threat match, won by Sexxxy Eddy.

With Brian “The Guppie” Stolovitch as master of ceremonies, the first match involving 2.0 and Extreme Revolution got under way with numerous high flying moves from both tag teams. Although short, the match was enjoyed by the approximately 400 in attendance and won by 2.0 with the help of a flying knee drop.

Then Big Kurt Lauderdale came out to the ring with manager “Motivator of Madness” being pulled along by his hair. Although not scheduled to wrestle, Big Kurt demanded that President Seska allow him to wrestler and Ninja #1 came out to accept the challenge. This match turned out to be the surprise of the evening. Hardcore rules were in effect with both wrestlers taking their turn hitting each other with chairs, barbed wire covered sticks and planks. Ninja impressed more than one with a 180-degrees flying elbow drop from the top rope to a dizzy Kurt on the floor. In the end, a bloody Kurt Lauderdale won the match with a top rope back suplex on Ninja, who was laid down on a table. The fans really appreciated this match as they gave both wrestlers a long ovation. It’s quite obvious there are big plans for Kurt Lauderdale in the future as he was very over with the fans.

This was followed by Fred “La Merveille” with the famed Marc “Le Grizzly” and the sexy Elsie in his corner against last minute replacement Crazy Crusher, when Arsenal wasn’t able to wrestle. Comedy was a big part of this match as constant interference by Elsie showing her “bruised butt” to the ref allowed Marc Le Grizzly to abuse Crusher with a series of elbow drop and body slams. Fred won the match with an impressive reverse chest drop on two chairs for the count.

Although the next match was expected to be huge on comedy, it turned out being very technical and quite hardcore when a bag of thumbtacks was dropped onto the mat so Dan Paysan and Beef Wellington could do battle. But even before the match started, as Wellington was making his entrance, he was attacked by big Tomassino with a chair shot in his back to allow Paysan to take the early advantage. Pepperoni and link sausages were used as weapons in this match with Paysan winning using a top rope back drop onto Wellington onto a table on the floor.

PCO–Pierre Carl Ouellet–had challenged Kid Kamikaze in the last card, and although Kid gave it everything he had, he was no match for PCO who beat him very rapidly using his modified cobra clutch for the win. PCO looked to be in great shape and although the sound system was poor, he looked to be heading towards a heel turn, but only time will tell.

The next match had Quebec veteran wrestler Franky “The Mobster” against cult favourite El Generico. This confrontation had both wrestlers doing much high flying, particularly from El Generico and many power moves from the both of them. Both wrestlers delighted the fans with their level of intensity and even though El Generico won the match, Franky continued his “paranoid antics” outside the ring by attacking a roadie on the way to the dressing room almost causing a small riot.

In what many considered as the “co-main event” of the evening, the IWS champion “Mr. Wrestling” Kevin Steen was up against long time rivals Excess69 and Sexxxy Eddy in a triple threat match. Just before the match, as all wrestlers were in the ring discussing the match, Steen spit on 69 and slapped Eddy to set the tone for the match. This match certainly would be the highlight of any wrestling card anywhere with all three wrestlers achieving incredible high flying moves from the top rope to the floor mats, with 69 doing an incredible face slam on the did of the ring to Kevin Steen that sent many wondering if Steen would ever get up for the win, but he did to retain his championship. Commissioner Fitzmaurice then appeared in the ring to give Excess69 a thundering chair shot to the back as a result of a continuing battle between the two. But Excess69 then reversed the attack by giving the commish all he could handle until Kid Kamikaze came to his rescue.

In the final match of the evening, with the IWS tag team champions “Le Syndicat de lutte Internet” defended their title against the talented Flying Hurricanes. This was also slated to be a ladder match and no one was disappointed as they all gave non stop action using loads of high flying moves, along with ladders being used as weapons, but when the unthinkable happened, both ladder broke during the match, Crazy f’n Manny saved the day by bringing a third ladder belonging to a construction crew. This seemed to motivate the Flying Hurricanes who won the match and became the new tag team champions.

The sell-out crowd left satisfied as did a New Jersey filming crew who was there to record the whole event for a cassette and DVD to be sold south of the border. The IWS continues to become more and more present on the North American wrestling scene with exposure also on Aaron Weiss’ PPV monthly shows, talent exchange with the Combat Zone Wrestling and now merchandise being sold in the United States. What’s next for the IWS?