Benoit DVD a must have

The long-awaited Chris Benoit DVD, Hard Knocks: The Chris Benoit Story, has arrived in the SLAM! offices, and quite honestly, this may be the best bio DVD WWE has ever put together.

The combination of the very revealing look at Benoit’s career and some of his best wrestling matches gives fans a great look at the man known as the Canadian Crippler. Including an hour-plus biography, 15 matches and other goodies, this two-disc set is a near-complete look at the life inside and outside the ring of one of the best technical wrestlers in the history of the business. 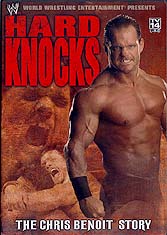 To start, the biography portion of the DVD takes fans outside the ropes as Benoit talks about his career, from his humble beginnings in Stu Hart’s basement to his triumph at Wrestlemania 20. Along the way, family and fellow wrestlers weigh in with their thoughts on Benoit.

While some fans may be inclined to skip over this section of the DVD, it would be a bad idea to do so. There are a couple segments that are absolutely must-see, including Benoit’s explanation of his departure from ECW, and a good deal of time that is spent on the end of his WCW days. The latter includes his first-ever appearance on WWF/E TV. Seeing Benoit break down while discussing Owen Hart’s death makes it obvious that the DVD isn’t just promotion. This is Benoit speaking from the heart.

Of course, the gravy to the bio’s steak are the matches. There’s a number of rare matches hear, including NJPW, Super J Cup and ECW bouts. For the Japanese matches, the matches include alternate commentaries featuring Tazz/Michael Cole and Todd Girsham/Benoit/Dean Malenko announce teams. The alt commentaries are very worthwhile, and add a ton of insight into the matches.

Of course, there are a bevy of Benoit WCW and WWF/E matches, including top bouts against Booker T, Bret Hart, Kurt Angle and the WMXX triple-threat. The rare classic against William Regal ath the Brian Pillman Tribute Show is also included, giving fans another reason to pick up the disc. There’s also the WCW title win over Sid Vicious and a cool match against Eddie Guererro from 1995. There are, however, some noticeably absent grapplers in these bouts, namely Malenko, who is heavily discussed throughout the DVD, and Chris Jericho, who many fans see as being one of Benoit’s greatest opponents.

Additionally, there are a few cool other segments on the compilation DVD, including some intriguing Confidential segments. The best, however, is an Easter Egg segment where Benoit’s father reveals the secret of how Chris lost his tooth.

Overall rating you ask? No question – this DVD is a must-have for any wrestling fan. Forget about renting, head straight to the SLAM! store and order Hard Knocks right now!

Because this is a landmark match that ranks in my top 5 of all time. The emotion carried this match that was already a 9 to a perfect 10.

If I produced this DVD, I would take out Chris Benoit vs. Al Snow,

Because while I can understand the desire to put a full Benoit ECW match on the show, but there are better ones. The focus of the ECW segment was Benoit’s kinship with Malenko, so a tag match with The Professor would have been a better fit.