Mat Matters: Chasing dreams is the essence of wrestling

It is easy to forget the reason why one loves professional wrestling. After sifting through necrophilia and father vs. daughter matches, it is easy to feel like throwing in the towel. Obviously many have, based on the downward spiral of ratings and house show attendance as of late. So amidst all of that, the reason why you enjoy wrestling can be lost.

It’s happened to a lot of people, including me.

Then I met Danny McGinn. 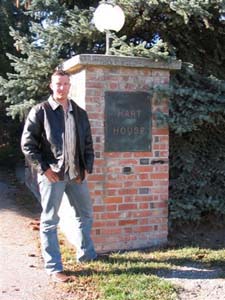 Danny outside the Hart House.

Danny is a 22-year-old from Milwaukee, Wisconsin, who wants to be a professional wrestler. His dream was to meet the Hart Family, especially Stu and Helen, and possibly train in the legendary Dungeon. McGinn has been derailed from his dreams in the past, including having reconstructive surgery a year ago after being assaulted.

With the recent death of Stu Hart, Danny realized that time is precious, and he needed to take the steps to pursue his dreams. With girlfriend Carly Christoph, he embarked on the 27-hour drive to Calgary. Before he left he sent emails out in hopes that someone could help him realize his dream.

So when he arrived in Calgary at 10:30 p.m. the night of Hart’s funeral, I met him at a restaurant. The bright-eyed 22-year-old seemed in awe of meeting even me. Little did he know what I had in store for him.

After a few hours of chatting and hearing about his hopes, dreams and passion for wrestling, they settled into their hotel room and I headed home, plotting the next day’s adventures.

Friday was a day he describes as “surreal” and “amazing.” After lunch we drove up to the Hart home. I get a thrill out of watching someone walk into the Dungeon for the first time. Like a kid in a candy store, Danny wandered around, looking at the wood-paneled walls, the green mat, and the free weights with the name Hart engraved in them. Overwhelmed by the history of the room, he could barely find the words to describe his feelings.

Minutes later he was introduced to all four Hart daughters, Ellie, Alison, Georgia and Diana. I stepped outside for a moment, and when I returned, he was sitting in the kitchen with cake and milk, talking with them like they were old friends. It has been said repeatedly how welcoming Stu was to people. It is a trait carried on by his daughters.

I literally had to drag Danny kicking and screaming out of the house in order for us to get on the road. It was an emotional farewell.

“That was incredible. I can’t believe that just happened,” he said as we followed wrestlers TJ Wilson, Dave Swift and Randy Myers on the road to Edmonton for the Prairie Wrestling Alliance show. Dan and I continued to talk during the ride up about all things wrestling. His enthusiasm was contagious, and we both recalled storylines and matches long forgotten.

When we finally arrived at gymnasium at NAIT in Edmonton, Danny sat enraptured as “the first good independent wrestling show I have ever seen” unfolded before him. Then he had another thrill. NWA-TNA’s Don Callis was on the card, as was Johnny Devine, who Danny had also been in touch with en route to Calgary. Devine and I both laughed when first talking to Danny, as he repeatedly said “tremendous” which is a word frequently in the vocabulary of Callis. We waited with baited breath as they talked for the first slip of the word, but shockingly neither said it.

It was hard for McGinn to leave Calgary, but obligations back in the States forced him to return home.

“Since I was 16, I’ve wanted to go Calgary and meet the Harts. Entering that special place with so much history and only being there a day before having to leave was difficult. I didn’t want to leave because I finally made it there,” he said.

Danny has started on a path to his dreams. It is now not a case of if he will pursue wrestling, but when. Whether he is someday a superstar, or works strictly independents, he has taken the first step of an incredible, challenging journey.

He is also a prime example of what is good about wrestling. Seeing someone chasing their dreams, meeting heroes, and the expression of awe on someone’s face the first time they experience something.

That is why I love wrestling.