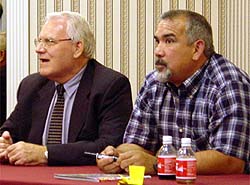 The foot traffic meant long lines and cramped quarters were the order of the day. “I can’t move,” George Mayfield, a Harrisburg, Pa. videotape dealer, squealed from behind a stack of Sheik tapes.

Fans clung to freshly autographed instant pictures as prized possessions, but the highlight of the day was the question-and-answer session in which the main guests alternated between the comical, ribald, and somber for a solid 90 minutes.

“I wanted to do something very unique that really hasn’t been done before, and that’s how the roundtable idea came up,” Fierro said.

Steamboat picked Ric Flair as his favorite opponent over Randy Savage, recalling that his WrestleMania III classic with Savage was too well-planned, if anything.

“Savage was the kind of guy who liked every single step of his match to be completely choreographed – every step,” said Steamboat, who retired in 1994 after back injuries.

“What we would do every night if we were in the same town, he would either meet at my room or I would meet at his room, and we’d go through the match. He’d go, ‘OK, I am at step 227; tell me the rest of the match.'”

By contrast, Steamboat wrestled Flair for 54 minutes in a memorable two-out-of-three falls at the April 1989 Clash of the Champions in New Orleans.

“Out of that whole hour, in that match, the only thing that we got was the three finishes. The rest, we winged it. We called it in the ring,” he said.

Von Erich was painfully candid about the loss of his three brothers to deaths at an early age, at least partially connected to wrestling.

“A radio station called me right after the 9/11 tragedy when the towers went down, like I’m an expert on grief. And they said, ‘How do you deal with it? How do you get over it?’ I hate to bum everybody out, but the fact is grief doesn’t ever get any better.

“Grief is tough, but when you have no other choice, you pick your head up and go on,” he said to a thunder of sympathetic applause. Heenan, as he did for years as a manager and commentator with Vince McMahon’s WWF, was ready with one-liners that send even seasoned standup artists fleeing for the amateur hour.

Asked which current WWE performer would be a staple of his “Heenan Family,” he wasted no time: “It’d be Vince. He’s not going to lose. He’s got a lot of money and he’s going to take care of me.”

More seriously, Heenan said he is impressed with Brock Lesnar, calling him “a great-looking specimen.”

The fact that long-hidden wrestling magic has been revealed did not seem to bother fans, who came from as far north as Canada and south as South Carolina.

“Everybody in wrestling kept a straight face about the business for years,” said Michael Long, a 43-year-old fan from Pennsylvania. “But I respect these guys more for telling the truth now because I know what they really went through.”

Logistical problems, such as the long lines, can be solved at future FAN SLAM! events. What is perhaps most impressive about the event is that Fierro, just like the stars he brought to his show, has life outside of wrestling.

But that’s just a job to subsidize his first love.

“I got hooked on this when I was a kid,” said Fierro, who has promoted smaller conventions, most recently in 1999 with Ted DiBiase and the Fabulous Moolah.

Though FAN SLAM! took several months of planning – “it took me a couple of months just to find Kevin von Erich’s phone number” – Fierro is ready to expand what is essentially his one-man operation.

He plans to stage four FAN SLAM! festivals annually. The next is set for Totowa, N.J. on Dec. 6, with a distinct Canadian connection – Dewey Robertson, also known as “The Missing Link” – is already booked.

“I’m going to keep these fresh,” he said. “It’s all about having the right, unique group of people and there’s still a bunch of guys out there that people want to see.”