Wrestling fans everywhere probably don’t know this, but I am more responsible than anyone, including mega-promoter Vince McMahon, Hulk Hogan and all the others for their sport being as popular today as it is.

Many years ago I had an opportunity to publish a startling expose that wrestling was fake, a revelation so extraordinary it would have doomed the game for all time. And I didn’t do it. Well, in fact, the guys I worked for wouldn’t let me do it (read: Major conspiracy). But I could have.

As a teenager, I worked as a copy-boy for the sports department at another major paper. In my spare time, I covered various sporting events, including wrestling, when the regular beat guys were busy elsewhere.

This one night I was assigned to cover a main event pitting one of Toronto’s local heroes, Hughie Weston (phony name for obvious reasons) against one of the all-time villains, Killer Schwartz (also fake).

“Is The Killer in his room?” he asked. When someone nodded, he said: “I’ve gotta see him. I created this new hold I want him to try on me that’ll drive the crowd crazy. It’s his turn to win tonight.”

My ears perked up. I was stunned. I had just heard a major wrestler admit that the outcome of his fight was already predetermined. This was astonishing news. This scoop would turn the entire sports world upside down. For years there had been whispers that wrestling was fixed, arranged, phony. And now I, alone, had incontrovertible proof.

I could barely wait for the night’s events to conclude so I could rush back to the paper and write my story. I didn’t even bother telling the night editor about my scoop, holding to the old adage “don’t tell it — write it!” And write it I did. The words sizzled on the page. When I handed it to him, I waited expectantly while he read it, certain my career was about to take off.

The editor finished reading, put the copy down, dribbled cigarette ash on his shirt, looked up at me and shook his head. Then he turned to another grizzled sportswriter nearby and said: “Hey Al, wrestling’s fake.” Al looked up, shook his head and muttered, in mock amazement: “No kidding?”

The editor handed my copy back to me and said: “Now hotshot, wanna try writing what really happened — in the ring.” My head dropped, I took the story and, with a heavy heart, returned to my typewriter to try again. Okay, I would give them what they wanted. But I knew — I knew.

Now the only reason I bring all this up now is that some of the books being reviewed here have exposes of their own. In fact, some of these grapplers have been ratting on their own game for years. They can afford to — wrestling is so big and so rich that nothing can ruin it for them. So a lot of these mugs pretend they’re giving the real goods. What they’re really doing is taking credit for something I tried to do years ago.

So just remember where you read it first.

IT’S GOOD TO BE KING … SOMETIMES 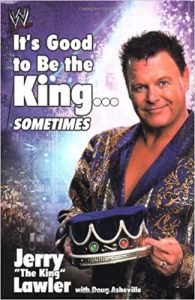 Jerry (The King) Lawler, veteran wrestler and mike-man for WWE Raw, makes no bones in this colourful, but too frequently self-indulgent and occasionally boring memoir regarding the true nature of his chosen sport.

Back when he was not only wrestling but booking bouts, he had a sign in his Memphis office that read: “Personal issues draw money.” It was a bold reminder that championships and belts and who won really played second fiddle to the key driving force that made the rassles so popular — the well-crafted feud.

And while Lawler is definitely not the first king of the ring to cop out that matches — especially big money ones — are carefully choreographed, that someone actually writes those mindless trash-talking interviews and the explosive feuds between participants and their hangers-on are plotted down to the itsy-bitsiest detail, he certainly does a yeoman’s job in revealing a lot of the behind-the-scenes machinations.

The truth is wrestling fans by and large don’t give a hoot. Many of them figured it out eons ago and the rest are likely too thick to tip to it. It isn’t about who wins or loses. It’s about entertainment. And fans are far more interested in the bang they get for their buck than who has won and lost the belt 450 times.

Lawler, a Memphis wrestling legend, knows this and fills his book with anecdotes and stories that give the inside poop on all the wacky schemes and theatrical storylines to many of the “memorable” bouts that brought in untold wealth down through the years. That’s the fun part.

He also provides solid insights into his role as an owner, wrestler and big-mouthed announcer without loading us down with too many details on too many matches. It’s more a flavour of what’s involved from top to bottom without getting bogged down in half-nelsons, flying drop-kicks and killer camel-crushes.

And, of course, he devotes ample space to some of the mat legends such as Ric Flair, Jesse Ventura, Andre the Giant, Terry Funk, Bret “Hitman” Hart, Hogan, The Undertaker, “Stone Cold” Steve Austin and, of course, The Rock.

Where the book really drags — and it happens far too often — is in some of his personal admissions, particularly of a sexual nature. Lawler is a stone cold stick man and freely admits women and sex has long been his chief vice. That might explain why he was such a dismal father and unable to remain true to any of his three wives. He also spends far too much time on his several lawsuits (yawn).

The early part of the book details his young years and how he began as a talented artist and radio deejay before local legend Jackie Fargo started him off as a wrestler. The middle portion follows his rise to prominence (he won a total of 13 championships) and his many feuds inside and out of the ring. Then come the Andy Kaufman years, his broadcast career and finally, his many sexual escapades (more yawns).

For those folks like moi who have little more than a passing interest in the rassles, the most interesting tale involved his longtime collaboration with the late comedian Kauffman and his zany forays into wrestling. While the story has been told and retold several times in recent years, it’s refreshing to read it from his viewpoint, as well as his much-publicized confrontation with actor Jim Carrey on the set of Man On The Moon.

Not only that, he reminisces about that other King in Memphis, Elvis Presley, and how the rock and roll giant might have become a wrestler himself if not for his premature demise. Hey, they could have matched Elvis with Kauffman, who occasionally imitated the latter in his act, with the winner meeting Lawler in a Memphis Death Match to name the real King.

But who would have believed it? 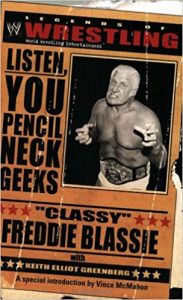 Now you wanna talk wrestling villains. Freddie Blassie was a villain and, truth be told, there was little classy about him.

They didn’t call him Vampire for nada. Not only did he have sharp teeth — he claimed he sharpened them with a file (ouch!) — but he frequently used them to draw blood from the forehead of his opponents and spit it on the canvas during countless matches throughout his 40-plus years in the squared circle.

He spent a good portion of his celebrated career as one of the most hated wrestlers in tights. In fact, during his big years in the ’60s and ’70s, he redefined the true meaning of being hated. This despicable semi-human resorted to the foulest of deeds, employed all manner of illegal tactics and shed more blood than an abattoir worker.

How hated was he? Well, death threats were a daily event in his life, frothing fans stabbed him 21 times and one individual thought it would serve him well to be doused with acid. Did these things bother him? Not on your bippy. He simply behaved worse and became even more of a heel. Nor did it help his cause any that he resorted to calling everyone a “pencil neck geek,” which became his catchphrase. Not very nice.

Better yet, during the early ’60s, while wrestling in Japan, he horrified the entire nation with his cretinous tactics and it was reported that several Japanese viewers suffered fatal heart attacks after watching him dismantle opponents in the ring. Hey, you can look it up.

And even after his injured knees forced him to retire as a wrestler, he wreaked even more havoc as one of WWF’s Devil Trinity of managers, along with those two other darlings, Lou Albano and the Grand Wizard. These were a trio of truly shameless cads. Blassie, in particular, managed some of the most heinous wrestlers to ever blind an opponent with a hidden mini-brick (Spiros Arion, Victor Rivera, Mr. Saito, Peter Maivia, Killer Khan, Mr. Fuji, Nikolai Volkoff and the Iron Sheik.)

He also united with Hulk Hogan at the beginning of his career, and had some good fortune with such veterans as Jesse Ventura, George “The Animal” Steele, and Adrian Adonis.

Like Lawler, Blassie also details his numerous sexual conquests as well as his failure in three marriages. And he talks about his cult status after his song, Pencil Neck Geek, made the top of the Dr. Demento Show playlist, and Andy Kauffman featured him in an underground flick called Breakfast With Blassie.

Did we mention he was a villain?