For the past 2 years, Kazuo ‘Sonny’ Onoo has been gearing up for the biggest fight in his life. Indeed, since being released from WCW/Time Warner in November of ’99, Onoo and a host of other past WCW employees, have filed a racial-discrimination lawsuit against WCW’s then parent company, Time Warner, which are still in the pre-trial court proceedings.

Moreover, he discusses his full story behind the lawsuits, and their latest developments, as well as some not so controversial happenings in his career.

Q) The discovery phase in the pre-trial proceedings of your court battle against WCW/Turner Sports/Time Warner/AOL concluded in January. Were you pleased with the way those proceedings went? 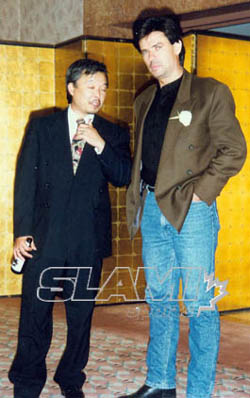 A) The truth is, the discovery period is still going on. The judge has granted an extension to the discovery period until April 1st. At this time, the number of affidavits from former WCW employees has been tremendous in my case. The evidence will show [that] certain people in power at WCW were racist or made inexcusable racist statements.

Q) Where do the lawsuits go from here? Would you be willing to settle out of court with Turner Sports?

A) At the end of the discovery period the judge will review the evidence and we will request a jury trial. I haven’t been offered any settlement so there is no reason to speculate on this.

Q) One of the main legal issues raised in the suits against Turner Sports/WCW is that as the employers of Vince Russo, the company should’ve taken action against him. How much did it pain you to see nothing done?

A) It is amazing to me that a company like Time Warner/AOL, a company which has the power to influence millions of people, allowed Vince Russo to be put in a position in which not only did he have power over people’s careers, but he had the power to send such a politically incorrect and negative message to its viewers…many of whom were children.

Q) What evidence of racial discrimination emerged during the time when Russo was at the company? Do you think he saw the minorities as powerless and tried to exploit that?

A) The evidence will show that during Vince Russo’s regime there were many incidents of racism at WCW.

Q) Could you list a few other instances where minority groups were treated as inferiors in the company?

A) The racism at WCW was multi-faceted. Examples include the differences in pay between white and minority wrestlers, merchandising opportunities (they were almost non existent for non-white wrestlers), opportunities for personal appearances, how minorities were consistently negatively portrayed in storylines, and, how after illness or injury white wrestlers were given treatment and/or recovery time with pay while non-white wrestlers for the most part were terminated.

Q) You were released from WCW in November of 1999, despite having another 15 months left on your contract. Did the release come as a shock to you or due to the circumstances was it expected?

A) No, I was completely blind-sided. During the fall of ’99, Earnest [Miller] and I had been featured on an internal company survey, in which he and I were rated as the highest recognised bad guys in WCW. I was also involved in a promotion with the merchandising department right up to the day I was let go.

Q) Initially, Eric Bischoff hired you in WCW to work as somewhat of an ‘agent’ for the NJPW (New Japan Pro Wrestling) talent and effectively to assist WCW in communicating with the New Japan grapplers. What connection, if any, did you have with NJPW prior to your involvement with WCW?

Q) How long have you known the great Ultimo Dragon (Yoshihiro Asai)? Furthermore, how depressing was it for you personally to see his career come to such an abrupt end due to a blunder by a WCW doctor?

A) Asai and I became acquainted early in 1995 while working for WCW. We became close friends and I came to greatly admire his work ethic. He looked to me for guidance during this time and I felt totally helpless in my ability to aide him. He is a perfect example of how, after this career ending surgical “blunder” by WCW, he was let go without any consideration (financial or for his future). Interestingly, he had been promised a future with WCW, which wasn’t honoured.

Q) What do you think of the Kaientai gimmick in the WWF? Are the talents of Michinoku & Funaki being wasted?

A) I really can’t comment on what appears on WWF. I am not fully apprised of the workings of their company.

Q) If a contract were offered to you by WWFE, would you accept it? If yes, on what grounds would you wish to enter the federation on?

A) Of course I’d consider an offer if one was made. Obviously they are the only game in town and in addition to that, many of my friends work for WWF. It would be a bonus to be working side by side with them again.

Q) You worked over in England last year at WrestleXpress 2001. How did that deal come about? What was the atmosphere like?

A) I was initially contacted by WX’s director to help them acquire talent for their event. Very quickly my involvement expanded. Everything was going well until the 911 tragedy hit. The show was cancelled and hopefully it can be rescheduled for the future.

Q) You recently landed work in Jimmy Hart’s latest phenomenon, the XWF. What are your thoughts on the XWF? Could it be wrestling’s next big thing?

A) With Jimmy Hart behind this project, I think it has a fighting chance. I know that everyone with XWF is working diligently to acquire a television spot and everything else is in place. At this point I’d say they are the #2 promotion in the country.

Q) You have quite an extensive martial arts background, having competed internationally and garnering many accolades along the way. Could you tell us about your experiences in that form of entertainment?

A) For the longest time, the martial arts were my life and defined who I was. From 1975 through 1987 I competed internationally in kickboxing and martial arts tournaments throughout the country. I was named the #1 bantamweight by the Professional Karate Association and have won numerous world championships. While working with Turner Sports I was involved with K-1 pay per view events. I credit many of my life’s successes to my martial arts background.

A) During the mid ’70’s Eric and I travelled the tournament circuit. Eric was one of the toughest fighters at the time and we had great times starting way back then.

Q) Do you still keep in touch with him?

A) Absolutely. Not only are Eric and I friends but our families have made a connection as well.