Backlash is one of the more aptly titled Pay-Per-Views that the WWF puts on. It connects directly with the fallout of Wrestlemania as well as the subsequent story lines told afterward.

Chris Benoit continuing his feud with Kurt Angle, Chris Jericho his with William Regal. Christian getting involved with Matt Hardy as part of the triple-threat European title match, X-Factor settling a grudge with the Dudley Boys. All of these matches have to do with some sort of payback. 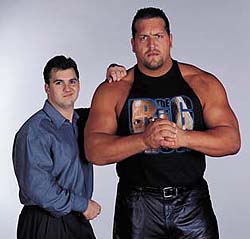 Shane McMahon and The Big Show in happier times.

There are some oddities though. The Big Show isn’t really mad at Shane McMahon, yet the two will square off in Last Man Standing Match this Sunday. As a matter of fact, it’s poppa Vince McMahon that has a beef with his son – the Show is just along for the ride.

So, what can one expect when the giant and the prodigal son lock horns?

“I plan on going out with Shane, giving 110 per cent, the best that I can give,” stated Paul Wight in a media conference call with SLAM! Wrestling. “Hopefully for the fans, they’ll enjoy it, hopefully they’ll appreciate it. Whatever transpires after that, we’ll just roll onto the next thing.”

The problem with this match-up, however, is that it appears to be a catch-22. While Show is a behemoth with tremendous power, and Shane McMahon has been known for some intriguing high-spots (not to mention taking insane bumps) it doesn’t look like it can benefit the Show in any way. If he wins, well, he’s the pro wrestler, he should win. He won’t impress too many people with a victory. And if he loses, it’s much worse, because it could totally take any steam out of his character making it look like he’s an ineffective “goof”.

“I think people get wrapped up in that crap too much,” says Show of the situation. “Losing one match does not make or break your friggin’ career. Jake “The Snake” (Roberts), my God, he was a tremendous athlete and one of the most popular guys ever and he hardly won a match. I don’t think it’s about winning or losing. I think it’s about the performance you give. Sometimes you can go out and give a fantastic performance and still go out and lose, and still be respected. That’s the biggest thing I’ve learned. Our business is entertainment. There’s some legitimacy to what you’re saying – I know what you’re saying – ‘Will it be detrimental to my career?’ I don’t think so. Obviously, the WWF is going to protect me, The Big Show, my character as best they can. I’m just looking forward to putting on a good match.”

Continuing on, Show states there isn’t too much he’s concerned with as it relates to the match’s finish. Although, he knows he’s in for a potentially crazy ride with Shane-O-Mac.

“To tell you the truth, I haven’t even thought about who wins, who loses, or what’s going on. The only thing I’m worried about is what’s going to land on top of me or what am I going to fall through (laughs). Knowing my luck, Shane will drop an elbow off the top of the Sears Tower and I have to lay there on the sidewalk to catch him.”

Although Paul Wight has been wrestling for about 5 years now in some ways he’s still new as the WCW was possibly not the best environment for him to get his start in the business. Pushed too quickly, Show didn’t have much time to get down certain basics. And it’s ironic that not only is he still feeling his way around but he’s also locking up with a non-wrestler.

Then there’s the flipside. Show will be surrounded by experienced wrestlers at Backlash so he can watch the goings-on from backstage and possibly learn a thing or two. Not to mention that he’s a fan and he gets to check out some matches he’s interested in seeing.

“The main event I would love to see just because I love watching those four guys work – Taker, Kane, Austin and HHH. Now that Austin’s a heel, he’s just so energetic and a lot of old school comes out of him; just the little things that I love seeing and learning from and watching. That I’m very excited to see.”

Before departing Show lists another match he is looking forward to.

“I’m also very excited to see Angle’s match with Benoit. Those two can just flat out ‘go’. Kurt Angle deserves so much respect because he’s such a tremendously nice human being, number one, he’s the most humble and nicest guy you’ve ever met in your life but he’s such a hard working guy in the ring. I watch some of the stuff that Chris and Kurt do – going for stuff, the different reversals – it’s just fascinating. I couldn’t wrestle that fast if I had a rocket tied to my back. The only time I move that fast is, maybe, when I’m trying to get to the breakfast table (laughs).”