You have to give it up to ECW. They not only aptly titled their soundtrack ECW: Anarchy Rocks, they more than adequately described what the listener is getting when picking up the soundtrack.

All of the 12 songs but one are of the new harder, edge-rock variety, or bounce metal as it is called in many circles. Heavy hitting rhythms propel the soundtrack along, married with shredding guitar riffs, and vocals that range from a straight-out belt, to being delivered through a rap-like cadence. 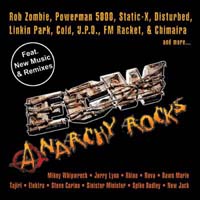 And the music does fit to a certain extent. The chaotic nature of songs from Linkin Park, Disturbed and Coal Chamber are easily connected to the style of wrestling that made ECW famous, however, the soundtrack is far from perfect.

First, the obvious. Because the vast majority of bands on the soundtrack are from the same genre of music (i.e. Static-X, Powerman 5000, Cold), you are not getting much of a variation in overall sound. After three or four tracks of the same style, the music tends to get boring after a while.

Second, having seen the likes of Jerry Lynn and Balls Mahoney wear various T-shirts that represent death metal bands (Dying Fetus and Immolation just to name a couple), it’s hard to envision that the stars with a penchant for extreme music would, if given their druthers, come to the ring by songs from Coal Chamber and Jesse James Dupree (singer of Jackyl) respectively.

Of final complaint, for a federation that prided itself on being extreme and having an underground cult following, the bands, not the music, kind of fly in the face of the ECW ethos, as several of the acts are either gold or multi-platinum selling artists. Bands like Coal Chamber, Rob Zombie and Disturbed hardly classify as underground, and because of their huge sales it can be argued that they represent more of the pop music side of rock and roll (if you sell over 500,000 records, you’re popular — there is no argument). While you can’t fault ECW for trying to make a few bucks by bringing in big names, it does kind of seem hypocritical in the sense that an extreme wrestling brand didn’t utilize more extreme forms of music for their wrestler entrance themes.

Otherwise, the people who buy this record will most likely go home happy. The music is very abrasive, much like the wrestlers the songs are associated with, and there are a couple of other goodies the purchaser gets. Chief among them is a video, playable through your computer, with a various montage of classic and present EC-dub wrestlers, from various classic matches, with Chimaira playing a cover of the Accept classic “Balls To The Wall” in the background.

You also get various ECW stars giving introductions to the songs, such as Rhino, Jerry Lynn, Joey Styles and Dawn Marie. The liner notes are also funny, and include quotes from the above named stars, among others.

All in all, it’s fair to say that ECW: Anarchy Rocks is a much better buy for your buck than the current WWF Volume 5. You’re actually getting you money’s worth through original songs from name bands, the extra’s are cool, and the CD can also be used as a keepsake, to remind you of ECW, as sadly, the fed no longer exists.