The Masked Marvel is 84 years old now and unable to come to the phone when the reporter’s call comes. But it’s not what you may think — Richard ‘Dick’ Phillips is actually out on his roof clearing off the snow. 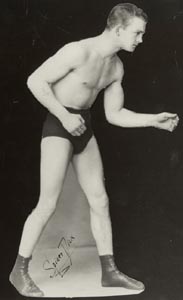 “I don’t listen to nobody. I keep going. I think I’m eternal,” he told SLAM! Wrestling after a clearing a heavy snowfall outside his home in Val Belair, Quebec.

While Phillips still lives on his own, his neighbours Elisabelle MacTaggert and her husband take care of him when they can. Elisabelle expressed exasperation when told of The Masked Marvel’s devious deeds on the rooftop. “He doesn’t tell me! He knows I’m going to get after him,” she exclaimed.

MacTaggert has known Phillips for more than 45 years, and is excited that a reporter wants to tell her friend’s story. Phillips is not one to promote himself. “He doesn’t go around bragging or anything,” she said. “But on occasion [his career] has come up, if somebody’s father remembered him or something like that.”

It’s more like somebody’s grandfather who would have remembered Phillips’s career. He started wrestling in 1939, having dabbled in amateur wrestling and boxing. “I was always in sports since I could walk,” he said, explaining how his father was American and his mother French-Canadian. Born in New York state, he moved to Quebec at five with his mother when his father died. 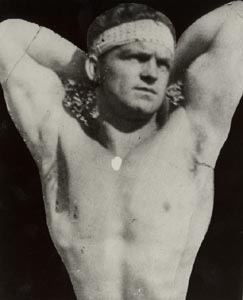 Dick Phillips in the photo that got him a job as a human model at an art school.

Settling just outside Quebec City, Phillips met many athletic-minded youth. Finding trainers wasn’t hard — they were already his friends. “I was trained, I was brought up with a champion of the world, Georges Gagne, which was a friend of mine and also a wrestler. And also a few boxers — Billy Green and Ralph McNaughton.”

At 15, he lied about his age, changing his birth certificate to enter the Navy. There, he was a boxer.

When he came out of the Navy, he went to work for a Quebec art school as a human model, and did that for three years. “I started getting my nose cracked, so I went I went in as a model at the art school!” he laughed.

Then Canada entered World War II in 1939 and Phillips was called to serve his home country again. “I was going to join the Navy or the Army. So when I went to the Army, they asked me — somebody knew me there, that I had always teamed around with people, boxers, and wrestlers — and they said, ‘This guy, we’ll have him to fight for the Forces.’ So they asked me if I wanted to fight for the forces in the War. What they did was make me the Masked Marvel.”

And so Dick Phillips served his country in a most unusual way — as a pro wrestler, defending the honour of the Forces, the Red Cross, the fire services, the Knights of Columbus.

The Masked Marvel travelled all up and down the eastern seaboard, and deep into Ontario and Quebec. To Phillips, it feels like he hit “every military camp” on the continent. Movies were even made of him to send out to the soldiers abroad.

After the war ended, The Masked Marvel did too. (Though Omer Marchessault later took up the name in Quebec.) Phillips unmasked in 1946, and began wrestling as Spider Dick. “I was a little bit disappointed, but I knew that the mask was coming off that night,” he said. The mask was a bit part of his mystique, and the newspapers often wondered who was behind it. “Some of them thought I was a protestant padre from overseas, all kinds of rumours going on, and write ups in the papers.”

Being Spider Dick Phillips meant more notoriety, and it hit him hard and he got into trouble. “To tell you the truth, I was drinking pretty heavily,” he admitted. Trouble with the cops followed, and he found himself fighting “anything that moved”.

Phillips was incarcerated from 1950-1953 in two different Quebec penitentiaries.

But wrestling still had a hold on him, as did the anonymity of being under a mask. “When I came out, I went back in the ring,” he said. 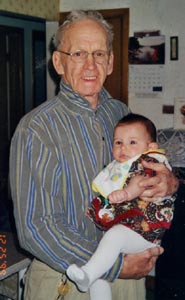 Dick Phillips in 1999 with his granddaughter Eliyze.

So Spider Dick became The Black Terror from 1953 to 1955, wrestling the new-to-wrestling Maurice Vachon, primarily around New Brunswick.

He hung up the mask and tights for good in 1955, and worked setting up scaffolding at construction sites for nine years.

Following an operation that took out a good portion of his stomach, Phillips had to find a new line of work. He got himself a taxi licence and did tourist work around Quebec City.

Now a naturalized Canadian, Phillips can look back on a wrestling career with more than 1,300 pro fights over a 14-year career.

“I went seven times for the champion of the world. It was nice. But I had very, very upsetting things, because in those days, the Masked Marvel was not allowed to be detected, to hold the belt. The most I had was the championship of Canada,” he said.