LAS VEGAS — There are many magicians around Las Vegas, both those working magic in their spectacular shows and the card wizards who try to beat the house.

But a most interesting kind of magic has been happening at the Riviera Hotel and Casino in town, and it’s far more rewarding and beautiful than the other kinds. It’s reunion magic, and old friends are seeing old friends again thanks to the Cauliflower Alley Club. 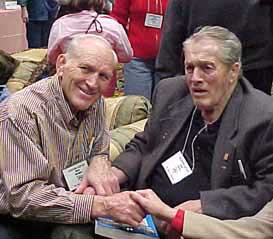 Old wrestling friends are reunited, sometimes after more than 30 years. Old promoters chat amicably with their old charges, up-and-comers talk to the old pros, journalists entice old memories, fans talk to the legends and get autographs. And everyone wins.

“The greatest part of coming to the Cauliflower Alley Club is memories,” said the 76-year-old Hard Boiled Haggerty, who wrestled 35 years and is a successful actor as well. “We all have memories, and this is something that you cannot buy because everybody who comes to the Cauliflower Alley is a rich man. They’re all rich in the fact that memories you cannot buy. I’m having the greatest time seeing my old friends. This is the greatest.”

Tiger Conway, Jr. echoed Haggerty’s statement. “It’s great and greater for me, myself being semi-retired, coming back and looking at all the other already retired legends, men that I worked with. It’s a great feeling, I tell you,” said the 47-year-old Conway, who is in town along with his father Tiger Conway, who also wrestled for decades.

It’s been interesting for Conway to talk to some of the men who were promoters or bookers during his day, like George Scott or Cowboy Bill Watts. “These men were my boss. I used to wrestle with them, then they became my boss. … It’s really exciting and a honour to be able to sit and talk to these men after taking orders from them for so long … It was always a business relationship at first. Now they’re more open.”

At 48, Playboy Buddy Rose is still involved in pro wrestling as a manager and host of the Rose Garden in the L.A.-based XPW. (He also still claims to be “a slim, trim 217!”) After 27 years in the business, Rose finds himself seeing many people that he hasn’t seen in a while.

“People have come up to me and I haven’t recognized them at all. Out of their element, away from wrestling, I didn’t recognize a lot of them. Some of them, I travelled thousands of miles with on planes and in cars. Unbelievable. They were my best friends and I didn’t remember them,” Rose said. “A lot of my mentors are here. It’s not like it’s the oldtimers any more, it’s the current wrestlers of today. But basically, it’s the ones that paved the way for the wrestlers wrestling today.”

Stampede Wrestling’s Dick Butkus Jr. (James Trimble) is one of those current up-and-comers who’s in town with the Hart family (Stu, Bruce, Ross and Diana). Being quite a bit younger than a lot of the oldtimers at the reunion, his interest obviously lies towards the more recent stars. Trimble was looking forward to meeting Bobby Heenan, Nick Bockwinkel, Roddy Piper, and was disappointed when Mick Foley had to cancel his appearance.

But there is much appeal to some of the legends as well. “I was excited to meet Killer Kowalksi for the second time. I didn’t get to speak to him much at Owen’s funeral but it’s nice to talk to him down here and find out what his experiences were like with Stu, because Stu’s told me a lot of stories about Killer Kowalski,” Trimble said.

The magic is all in the eyes. These men and women stars from the past may not recognize each other at first, may peer at their name-tags to determine who they are talking to, but once the connection is made, ‘poof’, a timewarp is opened, and they are years younger, talking about their exploits once again.

“You look in their eyes, you know the person,” Haggerty explained. “A lot of them, you don’t realize, you don’t recognize right off the bat. You see some of these guys in wheelchairs like Stu Hart. Holy God, all of a sudden I didn’t realize who he was until we had a grip on each other’s hands. And he still had that powerful hand, and here he is in a wheelchair.”