Devito more than just a Baldie

That is not the case for Tony Devito, however. In fact, other than the shaved head, he has very little in common with the cigar-chomping, trash-talking, back alley thug he portrays as one of The Baldies in Extreme Championship Wrestling.The trend in professional wrestling today is that gimmicks are a natural extension of a sports entertainer’s personality. For example, the Undertaker’s new “biker” look is more indicative of the man he really is than his previous “creature of the night” character.

“It’s strictly a gimmick,” he told SLAM! Wrestling in an exclusive interview. “My character has always been a badass. I’m not like that. I have a wife and two kids. I was never raised in New York, I live upstate, but that’s it.” 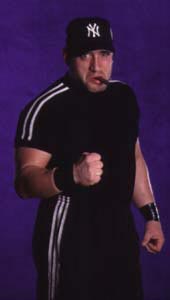 One other similarity Devito shares with his Baldie counterpart is a desire to be back in the main-event mix. For the past few months, he and partner Angel have been virtually unseen in the company’s major storylines. That hasn’t always been the case.

“We started off really strong, and then I guess there was a rethinking of plans. We had a great (feud) with Balls (Mahoney) and Axl (Rotten). When Axl left, we had the big one with New Jack. After that, things slowed down, I don’t know why.

“That might be changing now. It looks like we’re going to be starting something, either with Joey York and Christian Matthews or Justin Credible and (Steve) Corino.”

At ECW’s last Pay-Per-View show, January’s “Guilty as Charged”, the Baldies made their presence known by attacking both teams during the night, apparently having been contracted to do so by Cyrus in an effort to eliminate the competition for the men he manages.

“I don’t know if the ‘hired gun’ thing is the direction we’re going. We did that before when the bounty was put on Tommy Dreamer. Whether we do that again, I’m not sure… whatever happens, I hope it’s soon. I just want to go out and work. I’m looking forward to working any shows Paul (Heyman, ECW’s owner) books.”

Devito’s restlessness to perform stems from the reduction in number of live ECW events being held between pay-per-view dates. This move was yet another setback to the company who lost its national television contract last year, as well as some of its top stars who left for rival promotions. These events have triggered much speculation among the industry about ECW’s future survival.

Despite the uncertainty, Devito maintains that the locker room morale is still very high. “Everyone keeps working hard and hoping for the best. The fans still get their money’s worth, that’s never changed. We’ve got a lot of faith in Paul. We’ll back him up, because we believe in him, and we believe in ECW.”

For his part, Devito hasn’t looked at leaving the company for greener pastures. “The WWF doesn’t really have room for new guys. With WCW’s new owners, they might be hiring, but who knows? Still, I’m staying loyal to ECW.”

Besides, it’s not as if Devito’s never been with a company through its “lean years.” After completing his training under the tutelage of “Dr. D” David Schultz in 1991, he was signed to a lengthy run with the WWF from 1992 through 1996, a period which many consider to be the company’s worst in terms of creativity and popularity.

After leaving the WWF in 1996, Devito wrestled the independent circuit, an area he’d love to visit again while awaiting the word of ECW dates. “I’d love to do some indy shows. … I really want to come back to Canada, I had a great time last time we were there (last year, at ECW’s first Canadian show).”

In January 1999, he signed with ECW, co-forming The Baldies shortly thereafter. During his tenure, he has participated in some of the company’s more violent matches, including one in which New Jack suffered a serious injury which took him out of action for a lengthy period of time. Still, the risky nature of the game doesn’t bother Devito. “You don’t really worry about the danger when you’re out there. Sometimes, in the back, you have second thoughts. But when you hear the crowd, and the adrenaline rush hits, you just go for it. Besides, you can get hurt taking a regular bump, that’s the nature of the business. So why tone it down?”

“Toning down” the violence alone may not be sufficient for ECW’s critics. Many claim that the adult language and sexual content of the last pay-per-view was too extreme and crossed the boundaries of good taste. Devito disagrees. “It was no different from other Pay-Per-Views,” he said.

“The WWF curses a lot, but it gets edited out. I read that in Canada, a lot of the show gets cut out, so maybe you’re just not seeing it. As far as the sex, they push the same envelope as we do. In fact, they probably push the sex more… well, maybe not. Our last one did have a lot. But in general, we’re pretty much the same.”

Fans will be able to compare the two when the company presents its next PPV event on March 11. Devito doesn’t know where it is, or whether he’ll even be on the card, but he does promise a good show. “If there’s one thing the fans can count on,” he said, “it’s that we’ll keep on giving 100% no matter what. I hope everyone stays behind us and keeps on giving their support.”