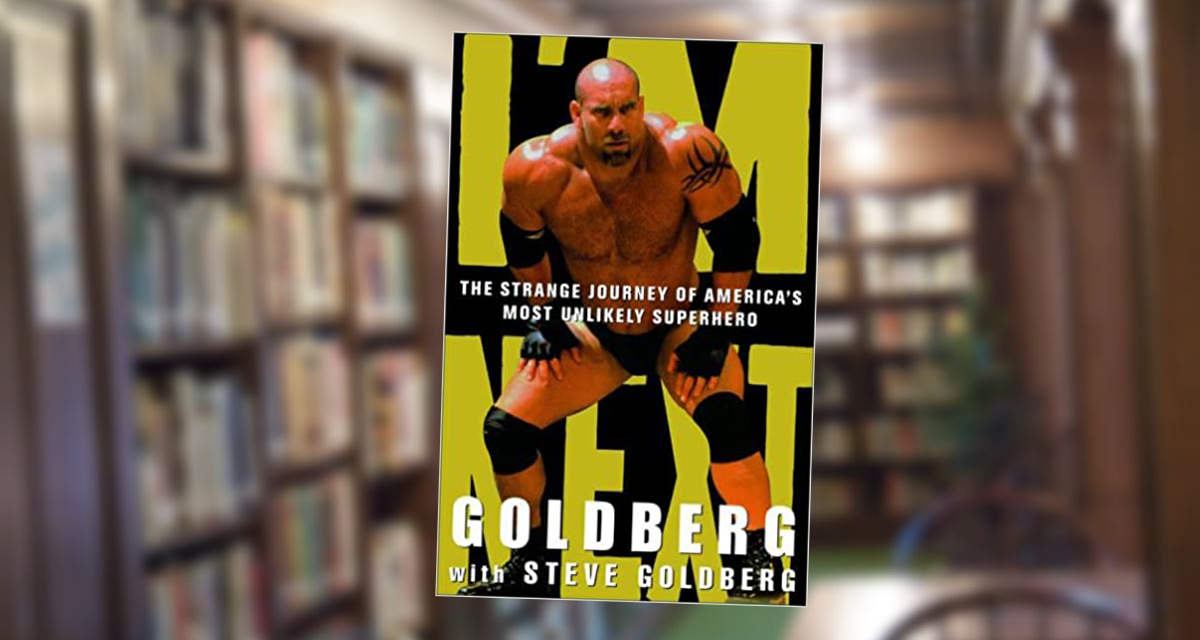 The comparisons will be drawn between Bill Goldberg’s new book and those of both The Rock and Mick Foley. All three wrote their books when they were on the top of their game, and best able to capitalize on their popularity.

And we’ll be waiting to see if Goldberg’s’ I’m Next is the next wrestling book to hit the top of the charts. Somehow I doubt it, if only because nobody’s watching WCW these days.

Goldberg’s book is better than I thought it would be. In fact, I enjoyed it quite a bit, and finished it in one weekend. The writing is clean, there are lots of interesting photos from all the stages of his life, and there’s tons of insight into what makes Goldberg tick.

But I can see the complaints coming from fans about all the football stuff that they have to skim through. Kind of like how both Rock and Foley’s books suffered terribly when they dealt with the more recent WWF happenings, and it felt all watered down and non-confrontational.

Speaking of “non-confrontational,” that’s not a word that would ever be used to describe Goldberg. He sure seems to have a lot of his mind, much to get off his chest, anger bubbling just below the surface. And it’s quite evident when he dislikes you: “What a jerk Joe Theisman really is… you’ll always be a pussy-ass quarterback to me… By the way, Joe, blow me.”

And then there’s his thoughts on Scott Hall. “There’s nothing that Scott Hall could ever do to change my opinion of him. Not a damn thing. Being drunk is no excuse for being a jackoff.”

Being drunk is another theme running through I’m Next. From his days at the University of Georgia, he proudly lists among his football honors “Quickest D.U.I.: 5th day on campus;” “Most alcohol consumed by a recruit;” and “Parking tickets: 150, yearly average.”

Perhaps it’s good that Goldberg is so open, and doesn’t try to hide anything. At least not in regards to partying, playing football (including the drugs needed to play) and beating people up. He alludes on a couple of occasions to being a real ladies’ man, but he isn’t one to kiss and tell.

The book is basically divided into three sections. The first part, smartly, is about Goldberg the wrestler and how he got to be world champion. It’s a story many wrestling fans are very familiar with, and he tries to answer their complaints by saying that he is a company man, and would job for anyone: “I don’t care about the outcome as long as my integrity doesn’t suffer.”

He addresses the things wrestling fans want to know – his training, his influences, his thoughts on the WWF’s knock-off character Gillberg, Chris Jericho’s Greenberg skits, dealing with Kevin Nash (“a master manipulator”), his match with Bret Hart that caused the Hitman’s lingering concussion (and subsequent retirement) and the chaos that is the WCW front office.

Plus there’s a few surprises as well. For one, he was three hours away from signing with the WWF when he signed with WCW to train. The main reason was that he wanted to stay in Atlanta.

The next section is pretty cool, and could only work with a close family. There’s one chapter written by Steve Goldberg (who worked with Bill on the entire book) that describes what a complete whirlwind hanging out with his brother can be. In this case, it’s the Super Bowl, and just how much attention the former WCW champ gets. The next chapter is by their father, Jed, who offers up his thoughts on things. Both chapters lead nicely into Bill’s stories about growing up.

The football section is pretty good, and over the years Goldberg played with many stars – even if he was usually too injured to suit up. For Canadians, his description of heading up to Vancouver to talk with the B.C. Lions will hurt a little bit, and perhaps remind everyone how ridiculously out-of-whack football is in the southern U.S., with money being pumped into football powerhouses at the high school level.

To conclude, Goldberg brings us up to date with his life in WCW. He talks about his return from the self-inflicted injury where he punched through a car window, and how it was “criminal” that WCW didn’t play up his return. Instead, Goldberg came back and fought Tank Abbott. He also addresses his heel turn, and the politics behind-the-scenes. It’s also interesting to hear about his praise for his agents and lawyers through all the insanity, and the wrongs of the wrestling world: “We have no governing body to watch over us and it pisses me off.”

Goldberg may never be as big a star as he was a couple of years ago, especially with WCW in a constant state of flux, but his talk about organizing the wrestlers could have a greater impact than anything he could ever accomplish in the ring.