The double ladder match at New Blood Rising will be a great chance for 3 Count to shine, and they know it.

Their opponents are the Jung Dragons, another young team wanting to make itself known. 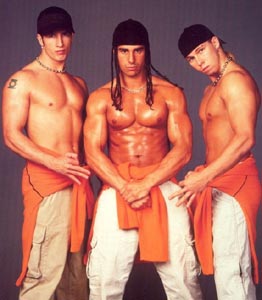 “We’re ready to go and make our mark as far as the wrestling industry goes, to make people look at us and say, ‘Hey, that’s the future right there.’,” 3 Count’s Shannon Moore told SLAM! Wrestling.

“Basically, we’re going to go all out,” promised Shane Helms. “That’s the main thing for us. We don’t want to do things that have already been done.”

To that end, Helms said that they have been watching tapes of previous ladder matches, trying to come up with some new ideas.

The challenge, according to Moore, is to be creative. “[We’ve] been innovating, coming up with our own stuff.”

The mood in WCW has improved recently, according to Helms and Moore, but it is still not perfect. “There’s still a lot of changes going on, still a lot of disorganization,” explained Helms. “There’s a lot of talk on doing new things, getting the company together. A lot of guys are really happy, but nothing’s really set in stone.”

Moore agreed. “It’s laid-back. It’s a little weird here and there but in any business that’s run with that many guys, you’ve got that much talent running around … there’s going to be chaos between the guys no matter if it’s young talent or the older guys. It’s pretty normal backstage.”

On a recent Nitro, 3 Count faced off against the Jung Dragons in an impromptu ladder match. It’s just a teaser of what’s to come, said Helms. “That ladder match was just a little four-minute spot fest. Wasn’t really much we could do in the four minutes. Hopefully in the pay-per-view match, we’ll get more time and do more stuff.”

Both Helms and Moore know that they are in for a beating at the pay-view-view, their bodies having to absorb an even greater amount of abuse than normal. “You know you’re going to take a damn beating. There ain’t much you can do there,” explained Helms.

Abbott is a wildcard on the outside of the ring. “He’s our slugger. He’s there to knock people out when we’re in trouble,” said Moore.

“Tank’s an outside element, something we can always fall back on,” added Helms. “I don’t know how involved Tank’s going to get in the ladder match. Tank’s not a high flier!”

3 Count definitely are high flyers however, and are big admirers of fellow North Carolinians the Hardy Boyz. And any ladder match planning has to encompass what the Hardys have done in the past.

“In the last two matches with the Hardy Boyz, they’ve pretty well covered everything,” said Helms. “It’s going to be really hard to come up with new stuff. That’s really what we’re focusing on.”

Wrestling in Canada will be new for both Helms and Moore. “I’ve only been to Canada once and that was for WCW’s last pay-per-view there, and I was just a spectator, I was just backstage, I didn’t do anything,” said Helms. Karagias wrestled on the WCW Mayhem PPV in Toronto last November.