More to Trish than T&A

ANAHEIM — Despite her years of fitness modelling and TV appearances, Trish Stratus still got a really big kick out of appearing at Sunday’s WrestleMania.

“Just being there was such a thrill to me because I’m such a fan and it’s my first pay-per-view and it’s WrestleMania. So put those two together and it’s just amazing,” she told SLAM! Wrestling after the event.

Stratus has only been with the WWF for a couple of months now on TV. Yet, she talks like a pro, dropping words like ‘gimmick’ and ‘working a program’ with ease. 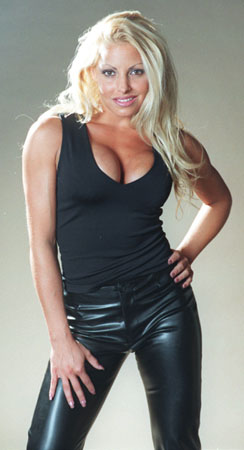 The Torontonian was forced to sit on the sidelines, waiting for her work visa to be processed so she could work in the United States. Once that hurdle was cleared, she was thrust into the mix.

“As soon as the [work visa] was done, got my gimmick, and got my T&A action and away I went,” she said. “We didn’t build too much towards WrestleMania because, obviously, timewise there was no time to work a program and also the main event was pretty much the big deal.”

But everyone wants to know two things about Trish: What’s up with the cowboy hat and cape? And Test and Prince Albert?

First the clothing. “The very first time they put me out, they said, ‘Okay, we’re going to debut you tonight. Literally, tonight. So go out and get something to wear.’ So I said, ‘What?!’ I ran out to just get a cute outfit, skirt and top, but I didn’t want to wear a typical type of outfit. As a wrestling fan I know that I like to associate people and characters. Like the Undertaker, you always know what he’s wearing, that kind of thing. So I was trying to look for something gimmicky, and I’m actually into that kind of style, as far as the coats and stuff. I found a great hat, and I thought, ‘Oh, yeah, this’ll be great. I can wear this with my outfit. This can be my gimmick.’ It seems to be working.”

As for T&A, formerly known as Test and Albert, Stratus sees great potential in them. (And judging from their short match on Monday Night RAW against Road Dogg and X-Pac, the WWF seems to also.)

“I think that they have a great presence. We just recently did a house show together. It was neat, because it was really the first time that I saw them work together and when you see them together,” said Stratus. “I think they’ve got great chemistry together, they are both really big guys and have a unique presence to them.”

The duo’s co-operation in the ring isn’t an accident, either. “They’re actually close friends in real life, so it comes across, I think, in their work and teamwork.”

From this point, she knows that the whole ‘T&A conception’ needs to be explained to the fans.

“After WrestleMania, it’s like January 2000. It’s the beginning of the year now for the wrestling world. So now we’re going to start focusing on characters and all these things. We’ll probably see some vignettes, we’ll see some personality between the three of us — how we’re interacting, why we’re together,” she explained.

Stratus believes that vignettes will definitely add interest to the team. “People haven’t really seen that side of Test nor Albert, or me either!”

Recently, WWF.com flew the WWF ‘divas’ to a sunny destination to do a swimsuit shoot. For Stratus, a veteran of the fitness magazine pages, that was old hat.

“That’s the easiest part of this whole thing. You know my former career as a fitness model … It’s funny, I say former, but I mean my ‘other’ career. There you go. My ‘bi-career’. So I was used to that, that was actually a comfortable environment. Doing the shoot was great, and it was a great chance to meet the girls all up close and personal, get on a personal level with all them so that we could be working until TV conditions, which is good.”

Ah yes, TV. Fans who caught her debut performance on the microphone at RAW a while back still chuckle over how Stratus stumbled through her lines. It was not the greatest debut interview in WWF history.

“The tough part is the TV. Not the TV so much, it’s the live, 20,000 fans. I don’t know if anyone caught my first promo on RAW,” she said laughing. “Yeah, I was a bit stunned, to say the least. But I’ll improve. I know it’s in me, it’s just a matter of drawing it out. Getting used to a new environment and everything. They’re working with me, and I know they have confidence in my potential.”

Stratus is not on the road with the WWF full-time yet, but it’s coming. She’s still training to be a wrestler at Sully’s Gym in Toronto twice a week. “I’m really focusing on that because I think it’s funny — it’s one thing to have T&A, ha, ha, excuse the parody, but I want to show that I can bring more to the whole picture.”

Speaking of pictures, Stratus is quite proud of her website (trishstratus.com and surfs the web a lot, reading what’s be said about her.