Current NWA Canadian champion E.Z. Ryder from Winnipeg was at the NWA convention last year, where he won the newly-created title over Paul Atlas. This year, he’s facing Sebastian P. Sterling in a Queen’s Cup Match, pitting a Brit versus a Canadian, in Charlotte at the Grady Cole Centre Saturday night. The two NWA-affiliated Canadian promotions are much better represented at this year’s show, and the wrestlers from both the CWF and ECCW see the event as an opportunity to strut their stuff, and see if they have what it takes to make it in the big time.

“I’m also hoping that this [show] helps put Canada and E.Z. Ryder on the pro wrestling map,” said Ryder, believing his chances to be 50/50 in the match against Sterling. 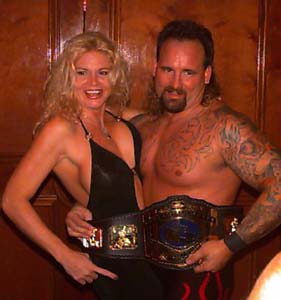 For Crusher Carlsen, the 450-pound monster from Saskatchewan, it will mark his first show in the United States. He’ll be teaming with “Gorgeous” Michelle Starr — his Canadian NWA tag team champion partner — in the tag tournament, this winners of which get to face the NWA World tag champion The Brotherhood later in the evening.

“We are matched up against a team called Triple X in the first round of the tag tournament,” said Carlsen. “They, like Starr and I, are young up and comers and I anticipate a hell of a match. I expect to do well and am looking forward to the experience.”

He’s more than a little excited about the whole experience. “It is an opportunity that we all relish. Everyone who gets into this business wants opportunities like this and I expect the guys from NWA Canada to stand out and make a statement at this show. … Besides, if the honour of representing not only NWA Canada but Canada isn’t enough to get you excited than there must be something wrong with you.”

Tornado Tony Kozina is a bit intimidated by the thought of representing his promotion and Canada at the convention. “It’s weird to think that I’m representing Canadian wrestling,” said Kozina, the current Canadian Junior Heavyweight champion. “That seems like a pretty big deal. I just hope that I can make all those who have helped elevate me to this spot proud. Without them, all this wouldn’t be possible.”

“I really don’t know what I’m walking into in Charlotte,” confessed Kozina, who wrestles for the B.C.-based ECCW. “I know I’m in a battle royal, and the winner faces Logan Caine for the NWA World Jr. Heavyweight title. Who is in the battle royal, how many participants, or the order of entry is unknown, so I’m kind of flying by the seat of my pants. With that said, I have every intention of winning the battle royal and facing Caine. That will be the test for me.”

Kozina recently got some words of wisdom from his mentor. “I recently spent some time with Matt Borne, the person who broke me into this business, and taught me most everything I know. He said, ‘You were made to be in this business. Don’t loose your focus.’ On September 25th I will be more focused than I’ve ever been.”

Like Carlsen and Ryder, he hopes that the show will mark a turning point in his career. “Win, lose, or draw, I’m hoping this event will be a springboard to other places.”

The Canadians are also looking forward to more than just the actual wrestling show.

Ryder hopes that “the loudest and craziest wrestling fans that the N.W.A. can offer” show up at the Grady Cole Centre, and that maybe he even gets to check out some Harley shops in town too.

It’s the legends who will be in attendance that are a big draw for Carlsen. “I am the kind of wrestler who is in touch with the history of the sport,” said Carlsen, saying that he’s looking forward to meeting Ricky Steamboat and “especially Lou Thesz.”

Perhaps they can learn from a couple more Canadian boys who made it big in wrestling who will be in Charlotte — Abdullah the Butcher and Rugged Ronnie Garvin.