WCW stars get stamped by St. Vincent and The Grenadines 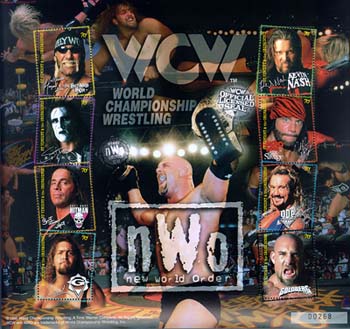 Ever felt the need to lick Sting or Big Sexy Kevin Nash?

Well, the tiny Caribbean nation of St. Vincent has something for you — WCW postage stamps!

“We are very excited to issue stamps of these heroes to children around the world,” said Cheryl Hind, postmaster of St. Vincent and The Grenadines in a press release. “Children are the future of this educational hobby of stamp collecting and issues like these should attract many young people to our stamps. The WCW is one of the most popular cable television programs in our nation and we are proud to be the first to honour these entertaining figures.”

The stamps were designed by Inter-Governmental Philatelic Corp., the world’s largest postal agency, which has worked with over 75 countries. The individually numbered postage stamp sheet also features action shots of the stars in the background around the stamps (called the selvage area in stamp terms).